Find this article at:
go.ncsu.edu/readext?611667
— Written By William Kelley and last updated by Jeanine Gaul 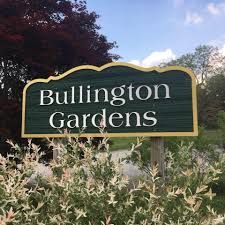 During the summer meeting in 2018, the State Extension Advisory Committee met at Highland Lakes in Henderson County. As part of the meeting, the group was taken on a tour of some of the local industries and places of interest. One of their stops was Bullington Gardens.

Bullington who was a NY City policeman had a true passion for horticulture which he finally pursued full time after retiring when he moved to Hendersonville with his wife Sally and founded Flora Knoll Farms in 1979. He operated the ornamental nursery until his passing in 1989. He had a vision for introducing new and unusual plants in to the nursery trade that included native azaleas, new varieties of mountain laurel and trees from Asia, mature examples of which can be found in the gardens such as a variety of Japanese maples, Tanyosho Japanese red pine, kousa dogwoods, Japanese stewartia, paper bark maple and Japanese pagoda tree. Other specimen plants include a Sargeant’s weeping hemlock, double flowering dogwood, big leaf magnolia and yellowwood. 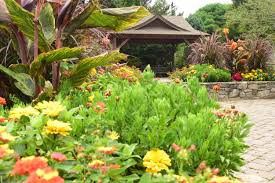 One of the many varieties of flowers grown at Bullington Gardens

The SAC enjoyed the opportunity to tour the gardens led by its Director, John Murphy. Along the spectacularly landscaped grounds is an azalea trail as well as a dahlia garden. Murphy does many programs for students and for the public at the gardens. One of these is a Fairy Garden which he designs in the wooded area of the property. This is a favorite of the kids and many come to see the Fairy Garden each summer while it is open.

Murphy conducts many other programs at Bullington including the BOOST program for physically and mentally challenged children from all four high schools. These kids participate in programs there each week during the school year. In the spring they begin a project to build their own garden and compete among the four schools for the best garden. It is a wonderful program that builds confidence and skills for the students.

There are also Horticulture Therapy classes that meet at the garden as well as numerous educational classes that are open to the public. Some of the events that help support the gardens are their annual plant sales in the spring and fall as well as their Wine & Dahlias fundraiser in September. Many Extension Master Gardener℠ volunteers provide much of the labor needed to keep the gardens maintained. Bullington Gardens is truly a remarkable and unique place. Cooperative Extension is proud to be a part of this great initiative. 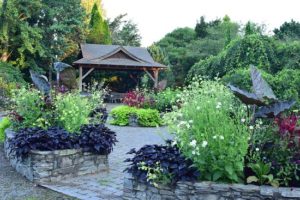 Henderson County Director Terry Kelley commented on the gardens. “Bullington is a true gem for Henderson County. We are fortunate to have such a place to provide educational and therapeutic opportunities for the students and people of Henderson County. It is a great partnership between the school system and NC State Extension. The success of the gardens could not be possible without the great leadership that John Murphy provides.”

The Advisory Council had a great time enjoying the peace and serenity as well as the beauty of the gardens. This is just one of the many great activities that Cooperative Extension provides across the state.