Find this article at:
go.ncsu.edu/readext?609860
— Written By Jeanine Gaul 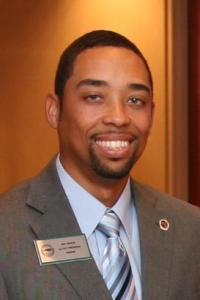 Ray Jeffers was born and raised in Person County. Ray attended Person County Schools and went on to attend Piedmont Community College (PCC) and North Carolina Agriculture & Technical State University (NCA&T). With Person County being his home, Ray, wanted to be involved to help ensure that Person County was the best possible place to live, work, and have recreation.Ray is currently serving his third term as a Person County Commissioner. In 2008, Ray was the youngest commissioner elected in the state of North Carolina.

In August 2013, Ray was sworn in as the 97th President of NC Association of County Commissioners. He the first County Commissioner from Person County to serve as NCACC President, as well as being the youngest President in the Association’s History! Some of Ray’s passions for Person County and the State of North Carolina have included economic development, education, farmland preservation, senior services, and support of small businesses to name a few.

As a Commissioner, Ray has been fiscally responsible with the county’s budget, promoted tax base growth, as well as expansion of employment opportunities for the county. Ray serves on numerous local, state, and National Boards. In July 2013 Ray was appointed as Chairman of the Rural Action Caucus for the National Association of Counties, where he and other key county officials represented America’s Rural Counties, Burroughs, and Parishes in Washington, DC discussing federal issues and legislation important to rural areas.